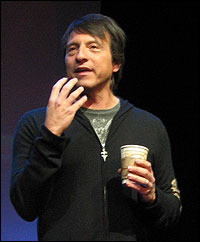 On Tuesday I had the chance to go down to a one day Pastor’s conference with Erwin McManus. If you’re not sure who he is, Erwin is pastor at a church in Los Angles called Mosaic. He is truly one of the most innovative and interesting people I have ever had the chance to be around. For my own reflection on the conference, I am going to blog over the next few days on some take aways.

One of the things that Erwin said was, “We need to be come more spiritual and more familiar with the voice of God.” The whole room of pastors sort of looked at him slightly insulted because, well, we are pastors! But then he explained further. 2 things he said are huge take aways from the day. He said, “Moderns are more willing to accept a religious experience without God, post-moderns are not as willing. Sometimes Christians have a harder time seeing Jesus in things than non-Christians. And the he said , “People want to get engaged with Christianity to see if it is real… very different than wanting to be a Christian to go to Heaven.”

His point was that the questions post-modern people are asking are different. They aren’t better, they aren’t worse, they are just different. He talked about the fact that when he shares the gospel with people, he really believes that the Spirit of God is already there, already active in the person’s life, and that it is his job to show the person how and point out that Spirit as the Spirit of Jesus. I wonder how our evangelism tactics might differ if we really believed that the Spirit of God was actively working in the person’s life that we were talking to. Would we feel the need to present an ironclad argument… or could we point out for them what the Spirit is doing in their heart?

It’s very different. One of the things that I love about the gospel is its adaptability. The gospel has survived/thrived in a pre-modern world, a modern world, and now in a world that is moving towards post-modernism. The message hasn’t changed in any of these settings, but the tactics and the focus that people have has. What a beautiful thing, what a brilliant God, that his word would be relevant and applicable in so many different cultures and situations.