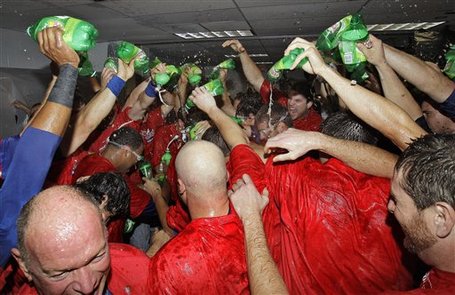 I was following the game closely, not necessarily because I love the Texas Rangers, but because I wanted so badly to see the Yankees lose. Yes, I’m one of those guys! So, I was pretty excited last night when the  Yankees lost and were eliminated from the playoffs. Seeing the Rangers advance to the World Series for the first time in their history was pretty fun to see. But, it was what followed the victory that really got my attention.

As you may know, one of the players on the Rangers, Josh Hamilton, has struggled with drug and alcohol abuse pretty intensely (almost losing his life) for the last five years. If he tests positive for drugs one more time he will receive a life-time ban from baseball. Anyway, when a team advances in the playoffs, the party that ensues is usually pretty epic. The one last night was for the most part not different than most, but it did have one significant deviation. Instead of using champagne, the Texas Rangers celebrated with GINGER ALE. That’s right, Ginger Ale! The reasoning was that, “If Josh can’t have alcohol, than none of us will either.” I was both surprised and challenged by this act of love shown by both the Rangers’ players and their organization.

My mind immediately went to the words of Paul, when he wrote to the Roman church,

[13] Therefore let us not pass judgment on one another any longer, but rather decide never to put a stumbling block or hindrance in the way of a brother. [14] I know and am persuaded in the Lord Jesus that nothing is unclean in itself, but it is unclean for anyone who thinks it unclean. [15] For if your brother is grieved by what you eat, you are no longer walking in love. By what you eat, do not destroy the one for whom Christ died. (Romans 14:13-15 ESV)

I don’t know that I’ve seen a better example of this than I did last night. My prayer is that in the church we would look out for our brothers and sisters with the same vigor. Determining that we would not cause anyone to stumble, but rather looking to others as better than ourselves and laying down our rights for one another.

I’m hoping for one more Ginger Ale celebration – after the Rangers win the series.