I was studying for this weekend and thinking about the omnipotence of God. How do I adequately describe the power of God. That he is all-powerful, there is nothing that eh is unable to do. I went around and filmed a video over at palomar college asking students what the first thing that came to their mind when they heard the word “powerful.” A lot of people said the president… and there were a few other random answers.

But for me, the first thing that I think of is… The Power Team. Do you remember the power team? It was/is a group of guys who go around and rip phone books in half all for the glory of Jesus. What a brilliant idea (?). Here is one press release that cam out about the power team:
THE POWER TEAM is a group of world class athletes who have performed the world’s greatest exhibitions of power, strength, speed, inspiration, and motivation in every state and in over 40 countries for over 30 years. These giant men, many weighing over 300 pounds, can blow up hot water bottles like balloons, snap baseball bats like twigs, lift telephone poles overhead, rip phone books and license plates like pieces of paper, and smash walls of ice and concrete.
I don’t think that’s the direction that I’m going this weekend, but it sure does bring back some good/funny memories. Check out some of these promotional pics! 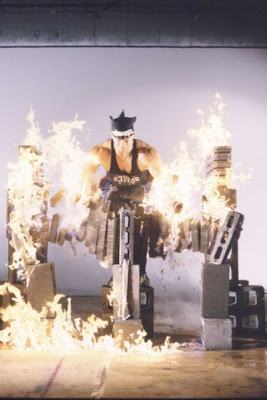 On second thought… I might see if they are open this weekend!