I saw this article a few days ago highlighting a new ad campaign in England. (Here is a link to the news-article in the BBC newspaper) The goal of the campaign is to place on the sides of at least 60 buses around England the phrase, “There’s probably no god, now stop worrying and enjoy your life.” 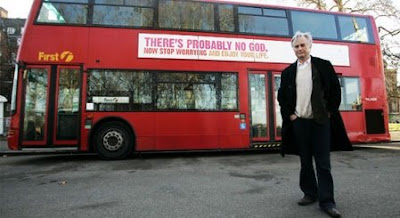 While I don’t think the campaign will be highly successful (probably about as successful as Christian advertising on buses), I do think it will make people think a little bit. To be honest I think that this is the way that the majority of people live anyway, even many of those who call themselves followers of Christ. I think when it comes down to the way that we live on a daily basis, I think this ad might describe us better than “taking up our cross and following Christ.”
The second thing that stands out to me about this ad is the word ‘probably’. “There’s probably no god…” It’s almost as though the people that created the ad (Richard Dawkins and friends) are admitting that this assertion they make has gaping incongruencies in it. Not exactly strong advertising.
Anyway, I thought that it was interesting. Hope it makes you think. If the trends hold, these ads will be on buses in the US in the next 20 years (we’re about that far behind Europe).
Ryan Paulson2009-01-16T17:16:00-07:00