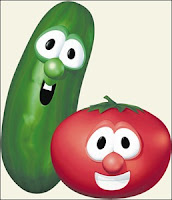 The other night I had the chance to go and hear Phil Vischer speak. He is the guy who wrote veggie tales. When I heard that he was speaking I thought that I was going to get a talk about releasing my inner creativity, or how to tell a good story… but what I got was a stripped bare, honest look at what it feels like when God kills your dream.

Phil is an interesting guy and because Veggie Tales has sold hundreds of millions of copies I figured his ministry was flourishing. Turns out his production company had to declare bankrupcy. The question he posed during his message was, what do you do when you have a dream and God blesses that dream, and then he kills it? That was a tough question for me to answer. The conclusion he drew was that God wants to know that He is more important to us than the work we are doing for Him. He used the example in scripture of Abrham and Isaac.
I was challenged and encouraged. I know that there are many times that the vision God has given me for ministry has become more important to me than a relationship with God. My thanks to Veggie Tales for the reminder of what’s really important.
Ryan Paulson2019-02-17T23:43:57-07:00